T-Mobile -Thoughts Ahead of the Q3 2012 Earnings Release

T-Mobile USA is set to release its Q3 earnings and performance metrics on Thursday , November 8th as part of its overall parent's (Deutsche Telekom) Q3 2012 release.  DT's US unit is fresh off an merger/acquisition announcement of MetroPCS in October  and that had grabbed much of the news around the carrier but the Q3 earnings numbers should reveal whether T-Mobile would continue key trends or reverse them.  The company has provided five focus areas throughout previous quarters and many of its Q3 progress points will fit again in these areas.

Under Amazing 4G Services, we should expect to hear about network progress (LTE buildout) and new halo devices. Under the Value Leader, we should expect to hear about any new services or marketing initiatives. In furthering the Trusted Brand, T-Mobile has been talking about expanding their distribution. For the last two quarters, the company has been putting a lot of effort into opening new 'doors', the first fruits of this may show up in Q3.  With the Multi-Segment Player focus, this is mostly about expanding wholesale (machine to machine/MVNOs) and ramping up the B2B efforts.   Finally the Challenger thrust should roll up cost control and churn containment.  Maybe there will be light shed on acquiring iPhone switchers. However, some performance metrics continue the bellwether of corporate direction.

Net Additions:  The trend doesn't look good for the company as its postpaid base continues on a negative trajectory since Q3 2010. On the other hand, T-Mobile's prepaid business is the bright spot in preventing a totally bleak story. The fact that the company has been able to post positive net prepaid additions in an ultra competitive prepaid segment is notable. Throughout the years, prepaid has been on the rise and makes up more of T-Mobile's customer base. In Q2 2010, the prepaid business accounted for about 20% of the base. By Q2 2012, that percentage increased to over 27%.  Q3 looks to increase that percentage.  Switching over to postpaid, the company still needs to reverse the slide.  The unlimited data and plan value story should resonate and pits the company against Sprint's own unlimited data proposition.  How well the company markets to iPhone switching will be a key element in increasing its postpaid pool. 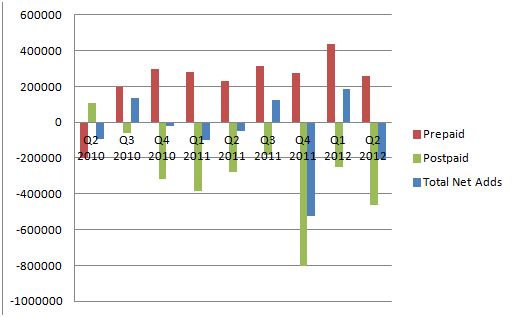 Any increase should signal somewhat to the traction of its expanded distribution strategy.

Churn:  Looking at prepaid churn, the company is doing a good job in stabilizing that base.  Q3 should continue the downward direction. However, the churn number currently at 6% is very high relative to rivals.  In contrast, Sprint's multi-branded prepaid group posted 3.37% for Q3 while dedicated prepaid plays MetroPCS and Leap are in mid-3% and mid-4%, respectively.  On the postpaid side, the magic threshold for Q3 should be sub 2%. Rival Sprint crossed that mark two quarters ago. T-Mobile remains the only national carrier to be above the 2% postpaid churn mark. 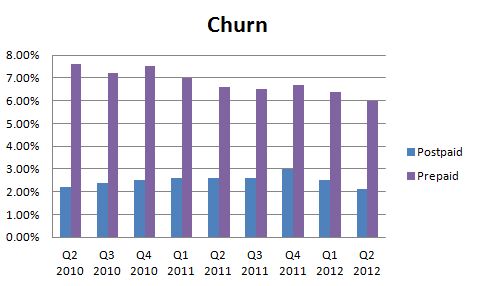 ARPU: The carrier is also behind in these metrics relative to its national rivals. The downward postpaid ARPU trend is in stark contrast to AT&T, Sprint and Verizon Wireless which has been sloping positively nicely. While AT&T is the postpaid ARPU leader at over $65, Verizon Wireless is T-Mobile's closest ARPU neighbor at $56 in Q2 before they moved to the new ARPA stat. On the prepaid side Sprint remained over the $26 mark in Q3 while regional Leap and MetroPCS are in the 40s.  To move the mark in prepaid, T-Mobile needs to focus on the high-value users. Of course this will be moot in 2013/2014 once MetroPCS starts to get integrated. 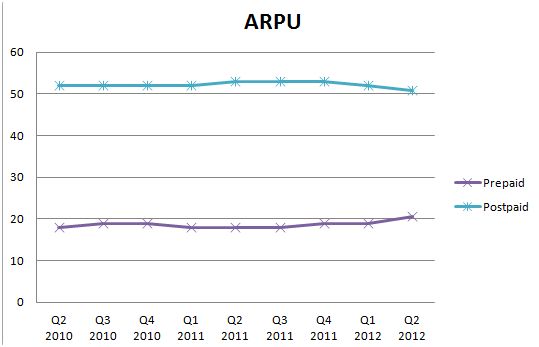 Finally Network: There will undoubtedly be discussion on how well the LTE buildout is progressing. T-Mobile while it pushes its 4G speed (AWS=based HSPA+), it should be stating how the well the PCS refarming is going. This refarming is central to moving ahead with its AWS LTE plans.  The PCS HSPA+ network also serves as the honeypot for additional unlocked GSM iPhone users. Given the jump that other national carriers have in LTE, there should be a mention or reiteration of when T-Mobile expects to launch LTE markets.