For eleven quarters now, America Movil USA has been losing subscribers.  For 2Q19, it was 164,0000.  To be sure that is a big number and with a half glass full view, it's better than the same quarter a year ago with 635,000 losses.  As usual, its Safelink brand brought the most headache with 95,000 followed by 42,000 at the other brands. Surprisingly, the positive Straight Talk growth engine lost 30,000. This speaks to the competitive environment within the prepaid segment.

Still, the company's subscriber base is still formidable with 21.4 million subscribers but T-Mobile with 21.3 million will likely surpass America Movil as the largest US prepaid provider next quarter or the following. For those who are keeping track, AT&T is less than 4 million behind T-Mobile. 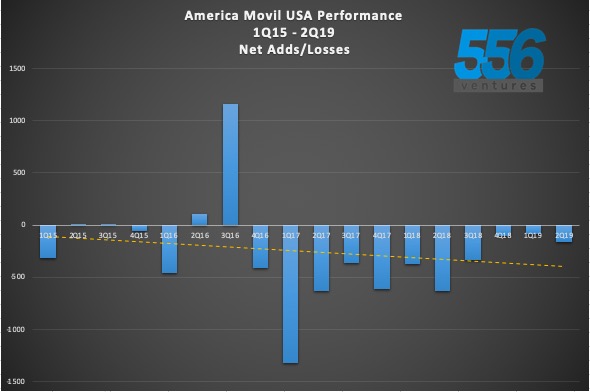 One can argue these new losses have shrunk relative to the massive numbers in 2017 and 2018. Yet to the company's credit, there some some positive key performance indicators (KPI), churn and ARPU.  Churn has moved from mid-4% to a decent 3.7% level this quarter. ARPU has risen to $26 now from $20 at EOY '15, $24 at EOY '17 and somewhat stable at $26 at EOY '18.  Overall quarterly revenue has wavered slightly above and below the $2B mark.

It's clear that the big, no huge, loss quarters are slowly going away but Safelink continues to be an albatross around the company's neck. Straight Talk growth to offset some loss isn't assured as prepaid competition continues to be a two horse race between T-Mobile and AT&T. Based on trends, America Movil USA will cede its position as the 2nd largest US prepaid player.

The company may be allowing the shedding of customers to trade for ARPU and revenue lift by focusing on its flagship Straight Talk brand. Looking ahead as a '19 goal, crossing from negative to positive growth would be a momentous milestone.