AT&T Handset Supercycle and Retaining the iPhone base?

AT&T has veered from its long time conservative promotional activity, relative to its peers.  With so many M&A and then integration irons in the fire, the gross add wireless business seemed to take a back seat. However with the Apple iPhone 12 launch, AT&T has made its most aggressive move to date.  That is an iPhone 12 can be obtained for free, a $800 value. Of course the conditional unlimited plan, minimum trade-in and 30 month installments apply. Moreover, the $800 can be applied against the 12 Pro and likely the 12 Pro Max model. To be sure, in a switcher world, the best promotions are reserved for those who jump carriers, or existing users adding a new line.

What's different this year is that this promotion is opened to existing subscribers without a new line condition. Though this seemed to be widely noted with the iPhone 12 launch,  a similar flagship device promotion happened in September with the Samsung Note 20 5G where a subscriber may get that device for free with similar conditions. Still, it wasn't an iPhone.

AT&T's multi-year iPhone exclusivity deal allowed it to build a large high-value base. Despite losing that exclusivity in 2011 and 2013 to competitors, iPhone customer accounts generate higher ARPA bearing revenue. Yet despite formidable switching attacks from T-Mobile over the years, AT&T has determined 4Q20 as its time to fight back.  Why?
The device "supercycle" moniker speaks to the 5G rollouts across the domestic landscape in that carriers needed to move their older device base to upgrade. In doing so, they would realize a better user experience from all the network improvements in the past and future year(s).  AT&T's tangible benefits include reduced postpaid churn (i.e., 30 month installment) and higher ARPU/ARPA (i.e., requisite unlimited plan).
In terms of timing, AT&T has been a leader(?) in with the lowest postpaid upgrade rate for over 20 quarters. This speaks to its conservative promotional activity. By contrast, its conservative peer, Verizon reported higher upgrade rates.  To be sure, the combination of AT&T conservative approach and competitors' aggressive promotions resulted in poor gross/net add performance and even net losses in some quarters. 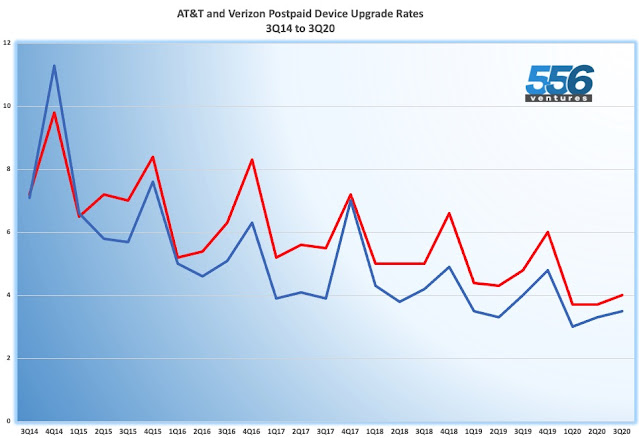 On its 3Q20 earnings call, AT&T CEO Stankey noted that the iPhone promotion is a means to reward the longtime iPhone customer base.  It's clear that Apple jumping on the 5G bandwagon was a key factor in the promotion calculation.  If all goes well, Stankey stated with HBO Max adoption, new mobile unlimited plans coupled with a 5G handset cycle would be a key wireless service revenue driver for the backhalf of 2020.  My own retail and customer care checks suggest this iPhone promotion is incredibly popular with desired color variants backlogged until December.
It's unclear when the promotion will end as reps didn't have any end date in their systems.  If successful, we can expect to see AT&T's device upgrade rate for 4Q20 spike higher than many previous 4Qs. Promotions are of course a part of the business and it will be interesting to see when the promotion ends, traditionally before Black Friday or keep the momentum throughout to the end of the year.  There are likely AT&T business case people who have gamed the right threshold of promotion tied to new and existing subscribers counts, expected plan upsell and device subsidy levels.  Looking ahead, it appears AT&T has a lot of retention momentum for 4Q20.