After much speculation and talk, Sprint finally announced its new Family Share Pack plan, 12 days after new CEO Marcelo Claure took over for Dan Hesse. The new plan structure that begins August 22 mirrors that of larger competitors Verizon Wireless and AT&T in that: 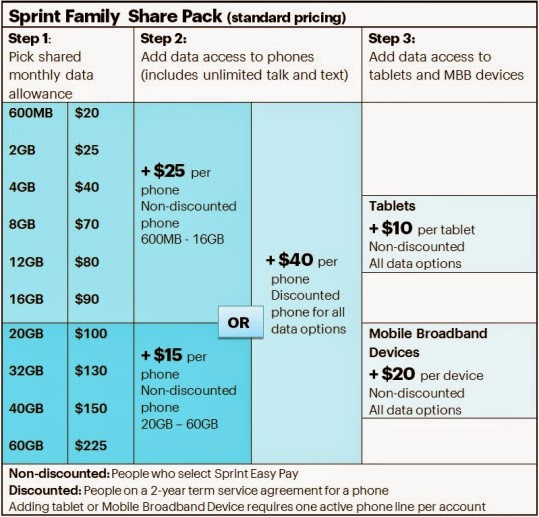 Today, August 11 is the day that new entrepreneurial CEO Marcelo Claure takes the helm at Sprint.  The wireless industry is watching what he'll do. For me, it's how aggressive he will be in acquiring customers and accelerating the 2.5GHz buildout beyond its current pace.

One of the questions has been when these new price plans will come into the market place, Q3 or Q4? I argue that the big iPhone 6 announcement and subsequent availability ~10 days later will is a de facto deadline that kicks off Q4. The new plans need to be in place for Sprint to stay competitive.
Aug. 11 (Bloomberg) -- Bill Ho, principal analyst at 556 Ventures, and Bloomberg Intelligence’s John Butler discuss expectations for Sprint’s new Chief Executive Officer Marcello Claure and look at the challenges he faces as the head of the nation’s number three wireless company. They speak on “Market Makers.”
Posted by 556 Ventures

Sprint (or really Softbank) has named Brightstar founder/CEO and board of director Marcelo Claure as its new CEO.  Mr. Claure has a wireless background, is a successful entrepreneur and by all accounts from his background, a hard charging doer.  While he is an outsider, he has wireless and global experience.

Mr. Claure is expected to move to Overland Park to take over the helm from Dan Hesse who has brought back Sprint from uncomfortable times, engineered the undoing of an AT&T-T-Mobile merger, fought off DISH's acquisition of Clearwire, and Sprint's acquisition by Softbank. Yet Mr. Hesse's turnaround wasn't fast enough for Softbank. T-Mobile's comeback and meteoric rise didn't help the situation at the expense of Sprint prepaid and postpaid.

With a new sheriff in town, how will Claure approach his new role?  Similar to many CEOs taking over new organizations, he'll likely assess the operations and management team. History has shown that many CEOs replace predecessors' execs and replace them with his own trusted team. For Mr. Hesse, he brought in AT&T Wireless alums Steve Elfman, Bill Malloy and Bob (H) Johnson during his tenure. While it doesn't appear that Mr. Claure has an operating company operations background, he will have to be a quick study, including an earnings call debut for Q3 2014 this fall.  The question is how many Sprint executives will remain and how many Brightstar (or even for that matter, Softbank) executives will make a relocation to Overland Park?

"..first priority will be to continue the build out of Sprint’s network by leveraging its strong spectrum holdings as well as ensuring that Sprint always maintains truly competitive offers in the marketplace."

Marcelo Claure: "In the short-term, we will focus on becoming extremely cost efficient and competing aggressively in the marketplace."

Masa Son: “Marcelo is a successful entrepreneur who transformed a start-up into a global telecommunications company. He has the management experience, passion and drive to create the strongest network and offer the best products and services in the wireless industry.”

The Network Vision Strategy - infrastructure: Can Mr. Claure affect the pace of LTE buildout? Everyone knows that Sprint has been touting the potential speed of Sprint Spark. However, this has been overshadowed by T-Mobile's deft network execution and unilaterally embracing speed as part of its marketing differentiation. John Saw replaced Bob Azzi ostensibly to accelerate the pace of Spark buildout, notably keeping intact the Network Vision strategy with still a disappointing 100M POP 2.5 GHz LTE target in 2015. In earnings calls and investor conferences, executives have stated that they're going as fast as they can and pushing infrastructure vendors as hard as they can.  Given this, does Mr. Claure have any room to push the buildout? Of course Sprint is flush with 2.5 spectrum and there had been previous media reports that Verizon Wireless was interested in some of it. Will this option be part of 'leveraging its strong spectrum holdings?"

Cost Efficiency: In the 2Q 2014 earnings call, Sprint's CFO stated that Sprint will continue to look to drive cost out of the business. This isn't really a surprise as it appears to be the similar refrain from competitors' CFOs. To some extent, larger competitors had somewhat formalized this. Verizon has long touted its corporate-wide Lean Six-Sigma program to gain efficiencies and drive out costs. AT&T's Project Agile has some of the same goals.  Sprint for its part had a very painful but some argue necessary draconian (no photocopying) era ushered in with former GE alum Bob Brust.  Sprint has already touted the synergies of volume device acquisition and pricing through Brightstar and Softbank as a positive impact on cost reduction.  How will Mr. Claure drive additional cost out of the business? Headcount immediately comes to mind but Sprint has also been on the path of personnel downsizing over the years.  Headcount reductions may be a core piece of 'containing' costs.

Aggressive customer acquisition & price wars: There is an expectation from the Softbank Chairman that Sprint should offer the best products and services in the wireless industry. T-Mobile's back from the ashes and customer growth story plays well to the media, regulatory and the financial community.  To some, they're giving the store away to drive the customer growth numbers at the expense of margins. This approach may very well be Sprint's next service move. To some extent, this is the Softbank Japan strategy in which it disrupted the Japanese mobile market at the expense of larger competitors KDDI and NTT DoCoMo.  To Softbank, this is operating from the same playbook.  Will Claure merely implement the Softbank plays modified for the U.S. marketplace?

Throughout his lobbying for an implicit T-Mobile-Sprint consolidation, Chairman Son had touted a populist message to bring a 'massive price war' to the American marketplace. While this may cringe the financial community since it will impact margins, it really shouldn't matter to Softbank as it has a much much longer view. Besides, Softbank owns a substantial/majority of Sprint anyway. The question from the services view is how aggressive Framily or new service plans will be in late Q3 and Q4 to spur turnaround customer growth. For Sprint it will have to be about price and giving more data in any tiered plans. Retaining unlimited is still an essential differentiator.

Consolidation of a different carrier: Just throwing it out there - if the Carlson family is finally willing, can Sprint acquire US Cellular for additional presence? Similar CDMA infrastructure and 700 A block support (though US Cellular also operates 850 LTE).

The back half of 2014 will be indeed interesting to see what Sprint does and how competitors will respond, if necessary.
Posted by 556 Ventures

Once again, I get together with Dan Meyer, Editor-in-Chief of RCR Wireless to talk about Q2 2014 carrier performance and key take aways from their earnings calls.