On Monday, November 28, AT&T launched DIRECTV Now to the press and media.  DIRECTV Now represents a huge growth component for AT&T. While many people look at the details of price, number of channels, and UI/UX, all these will continually be refined as the company markets its existence. The key point here is that the foundation was the DIRECTV (DTV) acquisition that enabled AT&T to springboard beyond its flattening wireless growth and its declining wireline and satellite business units.

Also key to the DIRECTV Now success is leveraging and further exploiting all the legacy DTV content relationships. If one follows the PR content announcements, it's easy to see why there had been a flurry of activity to locking in those content partners as the lynchpin for DIRECTV Now's mainstream premium content messaging. It's also why the Time Warner merger makes so much sense in the long haul - owner's economics and continued content resale to competitors. AT&T's longterm DTV play is to compete effectively outside of its wireline footprint. That's already in motion with its DTV satellite business but in comparison DIRECTV Now's customer acquisition costs are minimal as social media will be the foundational component in this streaming service. As John Stankey put it, DIRECTV Now is going after underpenetrated subscribers that do not want to have a longterm wireline contract, are transient/mobile and may not pass credit checks. These are the same traits for subprime, prepaid and millennial demographics.

One of the biggest question marks was the package pricing as only a $35 price point had been leaked earlier. Well, there are two $35 price points - one promotional and the other, 'permanent.' The promotional price will certainly draw a great deal of interest and potentially eat into cable & Verizon FiOS bundles - double and triple plays, especially when the consumer can save money on the set top box/DVR rental (i.e., I pay $12/mo).

I give AT&T's DTV folks credit in lining up all the relevant distribution partners of the DIRECTV Now app - on Apple TV, Roku and Amazon Fire TV (Chromecast is missing - I guess for now) as well as in the expected iTunes and Google Play stores. The Apple allure will be a huge driver for DIRECTV Now's success with Prepaying 3 months of service and receiving a free Apple TV. 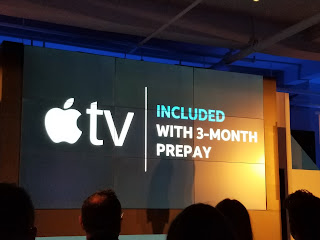 One other surprising and disruptive approach is aligning with LeEco, the emerging Chinese consumer brand of smartphones and televisions. Here, a DIRECTV Now subscription is thrown in (terms vary by device). This DTV/LeEco deal will surely go a long way to build LeEco consumer brand awareness faster and more impactful than that of Huawei, ZTE, OnePlus, etc.

I can go further in the UI/UX but that's for another post.