Dan Meyer, Editor-in-Chief from RCR Wireless and I talk 1Q14 US carrier results and any trends happening from the big 4. RCR Story Link

The prepaid sector is often characterized by high churn profiles and low credit scores. However, it is also a sector with high revenue and subscriber growth potential, courting feature phone upgraders (either prepaid customers or postpaid users looking for better deals in prepaid).  Sprint has made big bets on prepaid as a corporate growth engine. Prepaid subs represents 28% of the overall Sprint customer base.  Various sub brands (Assurance, Boost Mobile, Virgin Mobile) address specific prepaid demographics.  Yet 1Q14 was a bad quarter for prepaid with 465K losses, most of it blamed on Assurance brand losses. Boost's unlimited plans (along with Virgin Mobile's Beyond Talk plans) that garner higher monthly ARPU is clearly an important revenue component to Sprint's prepaid strategy and needs to be protected.

Now with Boost's new plans at $40, $50 and $60, these numbers are the magic competitive price points to wage the prepaid war in mid to late 2014.  Boost Mobile is merely catching up defensively to rivals that already presented those price points and sometimes the same data thresholds. 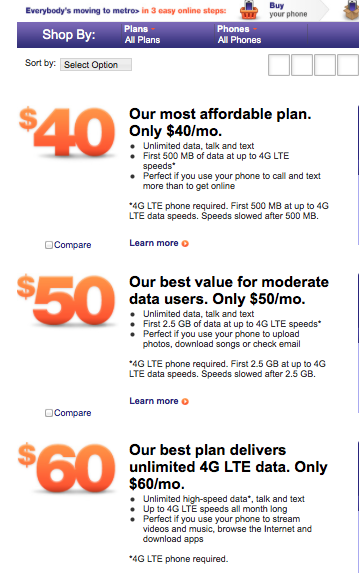 Every competitor has its own differentiation despite the same price points. The challenge is to communicate this to the target audience and cut through the usual selection criteria of device and plan pricing.
Boost Mobile needed to make its latest portfolio change to keep up with its main competitors.  There aren't any features in the new Unlimited Select plans that stand out against competitors. Boost Shrinkage discount approach is unique but how well does that retain a fickle customer segment?  Cricket and AT&T plans stand out as unlimited international texting (and limited international calling for GoPhone) are baked in.  Metro and Boost need to figure out if these features are competitively substantial in winning prepaid monthly adds.
Posted by 556 Ventures