On Sunday, April 29, 2018, T-Mobile and Sprint announced their intent to merge creating a $146B transaction to hopefully close in 1H19.  During the call, CEOs John Legere and Marcelo Claure talked up the consumer benefits of a combined company and that with this new company, the US would take back 5G leadership from the Asians.

There are so many areas to address in this proposed merger from regulatory hurdles, consumer benefits, job growth (or layoffs), the ‘mother of all networks,’ the winning brand, which executives came out ahead, etc.  I’ll start with the business service side because I’ve been asking this question to T-Mobile since the Un-carrier 9.0 announcement in March 2015 (Un-carrier for Business). The offering helped stimulate additional subscriber growth and impinged upon competitors’ specific business segments. Beyond the discounted plan structure, the ability to use free Wi-Fi during air travel, and free 2G global roaming, sophisticated higher revenue business services have not been in the T-Mobile portfolio. 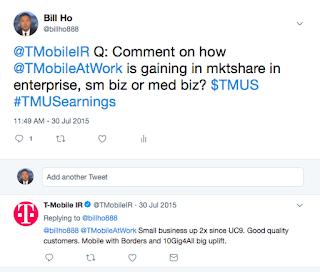 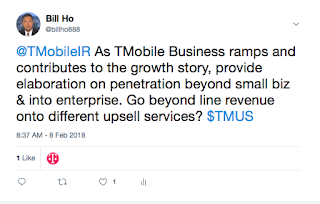 Sure, T-Mobile’s SyncUp fleet management solution or DIGITS offer another layer but those products also compete with similar or more sophisticated services from Sprint, AT&T and Verizon. It’s probably safe to say that much of T-Mobile’s business growth are lines in the small-medium business segment.

For those who are wondering what sophisticated business services may be, here’s a Sprint example below: 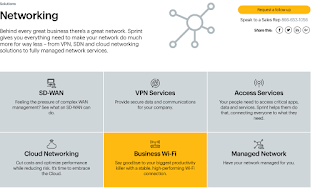 With a strong consumer message, I continue to wonder what of the business prospects with the combined company.   To be sure, much of the T-Mobile’s and Sprint’s business revenue challenges are unique. T-Mobile either doesn't see the return on investment in creating a sophisticated business portfolio, as that wouldn't be relevant to its subscriber base or they were waiting on Sprint all along.  Sprint has the business services (wireless and wireline) but lack the network credibility of their competitors.   I'm happy they addressed my question on the merger call and followed up with this responding vague Tweet. 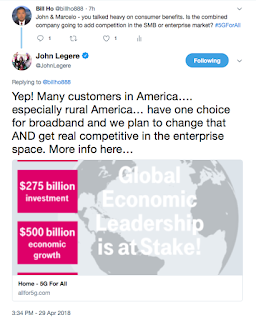 The low hanging fruit from the T-Mobile business expansion standpoint (and in their Twitter response) is rural America, bringing broadband competition to wireless and wireline incumbents. But that should already be on the T-Mobile radar, merger or not.  For Sprint’s part, the company’s 2.5 GHz 5G vision would be a compelling one in upselling and retaining its incumbent business base. Yet with capital constraints and other financial challenges, the pace, breadth and full realization of that Sprint-only 5G network is questionable (i.e., lots of major regions or national). Sprint is already in LTE catch up mode against competitors.

A far-reaching network is everything. Verizon and AT&T know this and have invested tens of billions in their networks.  Both companies have captured consumer and business marketshare as a result. A new T-Mobile with a true 5G national network, combining low (600 MHz), mid-band (2.5 GHz) and future millimeter wave assets will surely provide a formidable network competitor to the big two, and foundational to future business revenue expansion.

Assuming the deal is done and approved by 1H19 projections, it’s logical that parents, DT and Softbank, would increase capital (and not count on OpEx synergies) to accelerate the network vision (pun intended).  T-Mobile has a solid track record in integration (MetroPCS), network expansion and great execution. I’d expect no less from the combined Sprint and T-Mobile network planning and engineering teams. T-Mobile is already on track to plant a national 5G network flag thanks to its 600 MHz (albeit with thin dedicated spectrum), when that will be supplemented by the 2.5 GHz (>300M POPs) is the big question.   If the deal isn't approved, T-Mobile will need to build up its business portfolio to truly compete.

On T-Mobile's 1Q18 Earnings Call, CEO Mike Sievert addressed the attacking the business segment at the new T-Mobile.   He stated: " Our business plan is funded for an expansion of our enterprise team. In year one, we’re going to take advantage of this set of capabilities and get after it and we funded our plan in year one to hire aggressively to get after the business market."