In July, Verizon changed their wireless rate plan portfolio. The media and tech bloggers derided those changes because the new price points were higher than those replaced.  Verizon argued (logically) that in the end, new plan subscribers got more MB/$ spent.  Yes, the math holds true.  I argued back then that while many focused on the lower (consumer) price points, the real threat was to AT&T in the mid and high tiers where high-value customers, SMBs and enterprises shopped.

Fast forward to mid-August as AT&T has announced their own rate changes.  No longer is the portfolio named Mobile Share Value but now Mobile Share Advantage (MSA). The "Advantage" piece speaks to ridding of the overage penalty and providing consumer friendly (albeit punishingly slow) 2G data rates.  Also, expanding the North American for 10 GB subs with unlimited talk/text to Mexico and Canada with local plan capability in Mexico.

The MSA plans to be in effect on August 21st have several important goals:

In the history of rate plan competition, price planners/product managers have at times matched price points, voice minutes or data thresholds.  Every company has their own reasons and their own strategies. With the Mobile Share Advantage, AT&T chose to match price and data at the 16GB level but gave 1 GB more for 25 GB at the $110 price point.  This suggests to me that this may be a high-value customer battleground area. 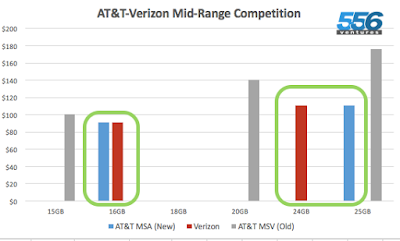 In July, I noted that the Verizon's rate changes threatened AT&T's high-value users  (SMB and enterprise) customers. Historically, AT&T and Verizon usually match each other at these higher tiers with the logic that no one really needs a huge price wars with these (usually) less price insensitive accounts.  Looking at the chart, it's notable how much the pricing has dropped for both these premium carriers. 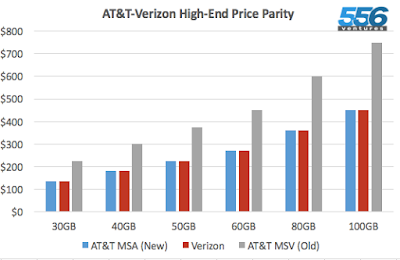 As a side observation, it doesn't help that Sprint and T-Mobile are actively going after these higher value postpaid accounts.

Though AT&T's changes for the most part draw level to its largest competitor, Verizon has a 2GB/line promotion applicable to  XL levels and above.

It is unclear when this 2GB promotion will end, AT&T is still under the competitive gun, especially as the 3Q16 ends and ultra-competitive 4Q16 begins - read iPhone 7 launch.  Whether AT&T will inject a similar promotion remains to be seen but the threat is formidable unless the carrier can change the playing field with an aggressive handset promotion or trade-in values.

Lost in the changes in price points is the increase in the per line access fee. What was $15/line/month at plans greater than 15 GB and $25 for plans less than 15GB/line/month, the new access rate is $20.  This is in line with Verizon's.  While I saw the lower $15 as a price differentiation, the new hike falls in line with AT&T (and Verizon's) march to higher profitability per user/per account.  One can also argue that with the mid and high-tier offerings, AT&T is giving away more GB so there needs to be a monetary balance to make up for it.

Asterisk*: For business plans, AT&T has kept the $15/month access line to give it that price differentiation.

Moreover, with service revenue trending downwards thanks to EIP, anything to reverse the decreasing ARPU trends and at the same time increase the average revenue per account (ARPA) will be welcomed by the CFO's office.  As AT&T iPhone 5, 5s and 6 users upgrade to the new iPhone, service reps will invariably push the new MSA plans as a new value with lower pricing, by default fighting any switching thoughts.

Many may be puzzled why any Verizon and AT&T rate changes are against each other and not Sprint and T-Mobile. It's simple, Verizon and AT&T position themselves as premium carriers and focused on purely profitability.  From a corporate revenue standpoint, there is no need to race to the bottom and upset stable revenue trends.  However, it is exactly this stance that Sprint and T-Mobile with less postpaid base are willing to take lower profitability margins (relative to the big two) to easily take marketshare. T-Mobile's positive porting numbers against Verizon and AT&T quarter over quarter speaks to the big two's profitability handcuffs.  Of course with the introduction of T-Mobile One and Sprint Unlimited Freedom may continue to claw for AT&T and Verizon high data consumers.
Posted by 556 Ventures

An end of the second quarter 2016 wrap up of the top 4 US carrier community. We discussed T-Mobile quickly with smatterings of Verizon's new head of wireless hire, Ronan Dunne and their path to retort T-Mobile and Sprint.  As with previous Carrier Wraps, we discuss prepaid and postpaid trends.

We end by discussing our picks of the session - Glenlivet Nadurra and Macallan 10 yr Fine Oak.
Posted by 556 Ventures