In the October 15, 2012 Japanese Strategic Partnership announcement, SoftBank's CEO Masayoshi Son cited slow US network speed compared to Japan.  Though the chart reflects 2011 data and may change as the US builds out LTE in the coming years, the point is that Japan leads the way. Conspicuously absent, by the way, are know speed-forward countries South Korea and Singapore. 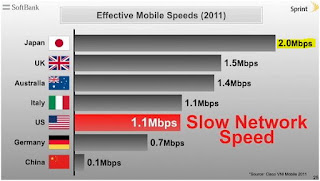 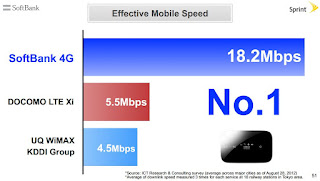 Reading between the lines, SoftBank has lofty speed ambitions based on the Japanese market. While LTE will be the great speed equalizer in the US market stands now, competitors cannot claim overall speed dominance.  Sure AT&T and Verizon Wireless go back and forth citing 3rd parties (here and here), the reality is that carriers cannot officially state that their LTE is faster than competitors.  Part of the speed equation is capacity.  While speed brings in the early adopter speed geeks, the bigger carrier thrust is to make the data service available to everyone.  This means having sufficient capacity within spectrum constraints.

US carriers have been providing operating expectations though. Some more specific than others.

"In real-world, fully loaded network environments, 4G LTE users should experience average data rates of 5 to 12 megabits per second (Mbps) on the downlink and 2 to 5 Mbps on the uplink. When customers travel outside of 4G LTE coverage areas, devices automatically connect to the Verizon Wireless 3G network, where available, enabling customers to stay connected from coast to coast."


AT&T positions its LTE speed in comparison to 3G in its latest LTE market expansion in Dallas-Fort Worth release.

" Faster speeds. LTE technology is capable of delivering mobile Internet speeds up to 10 times faster than 3G. Customers can stream, download, upload and game faster than ever before."

Interestingly, rather than stating a range, it pits it has superior LTE speed against Verizon Wireless citing a PC World comparison (here).


Now back to Sprint.  As it builds out its Network Vision strategy, its LTE implementation is a rather small 5X5 MHz channel implementation. Smaller channels and balancing capacity may yield slower speeds but that doesn't stop its marketing.

Looking ahead when Clearwire comes into the picture with their TD-LTE technology, the current Sprint view is for data offload in 'heavy data tonnage' markets. This suggests a capacity approach given Sprint's unlimited data proposition.  Yet Clearwire's spectrum depth also allows Sprint to add the additional speed component, thereby realizing Son's vision of blowing the doors off competitors (in Japan and the US).  If speed (along with unlimited) is going to be a market differentiation, Clearwire and network expansion and tweaks will be necessary in the coming years.  This means more capital is necessary for Clearwire to do so.  Direction and commitment will be necessary from the 'new' Sprint.