If one looks at the last couple of quarters of net add performance, the prepaid market seems to be flattening. Powerhouses Metro by T-Mobile and Cricket which had dominated with large net additions have dropped from their high go-go growth past days.  Prepaid competition has always been tough and will certainly continue.  The drama in the T-Mobile/Sprint deal where uncertainty and change has brought concern to the dealer networks and employee bases, AT&T is standing out as the stable ship.

To appreciate the AT&T's prepaid growth story, it began with the Leap acquisition announced in July of '13 and closed in March of '14.  Between the acquisition announcement and the close, Leap's subscriber base shrunk from about 5 million to over 4.5 million.  With Leap, AT&T's prepaid base moved to about 10 million subscribers at the close.  The Leap brand, Cricket, though known was declining and had an impact on AT&T's results in 2014. However, with brand expansion beyond Leap's regional footprint and AT&T's national coverage, the new Cricket began its growth story.   Increasing the 'doors' or distribution was central in this effort. This included expanding its dealer network and big box retail. 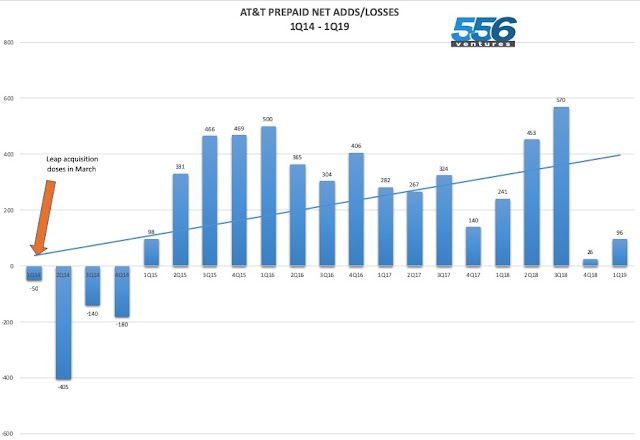 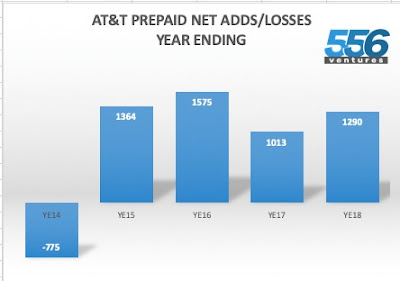 As prepaid evolved, it's still attracting a price sensitive segment but low plan price and free/discounted phones are just but several buying considerations. Embedding value is now mirroring postpaid plans. For example, Metro by T-Mobile is including mobile hotspot capability, music, generous Google storage and even Amazon Prime in higher tier plans. For Cricket's part, because of AT&T's Mexican network assets and Canadian roaming agreements, unlimited plan users can roam without charge in those countries. 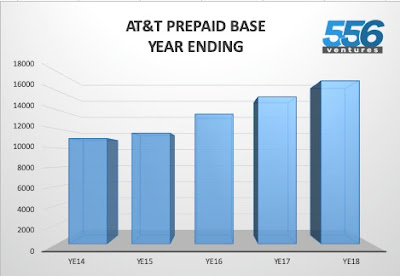 Recently, I had the opportunity to chat with John Dwyer, President of AT&T Prepaid on the state of his business.  A couple of Cricket highlights came up namely in the area of customer satisfaction triggered by comments made on the 1Q19 earnings call.  Though these were selected for the best PR, Chairman Stephenson revealed some important data points: 1) churn was under 3% and 2) Cricket subscribers accounted for 10 of the 17 million base, and had more than doubled since the Leap acquisition close.

Low churn is a key indicator of customer satisfaction and John reinforced that notion with JD Power wins in purchasing experience and customer satisfaction. As the former head of customer experience, he said that Cricket's net promoter score (NPS) moved from a -7 to now 43. By the way, NPS ranges from -100 to 100.  The 10 million Cricket subs suggest that there are 7 million prepaid subs to be share between branded prepaid and prepaid IoT.

Branded prepaid took a shellacking in 4Q18 negating most of Cricket's 240K net adds. Observers checking the AT&T branded plans would note a double data promotion on its $50 ($40 with autopay) that runs until the end of July that suspiciously counters a similar promotion at Verizon, which isn't a surprise as each company have been longtime postpaid rivals for the same demographic.  This should hold true for each's branded prepaid offerings.

Back to the growth story - the last two quarters are shockingly lower than the previous 14 quarters.  The question is has the growth engine stalled because of overall market trends? Indeed, competitors' previous quarter net addition numbers were comparably lower.  One possibility could be on the coat tails of the FirstNet buildout wherein AT&T claims a positive trajectory for postpaid growth.  While they cite promotional activity for FirstNet accounts to include families, FirstNet is also going to rural communities in which AT&T has planned on new distribution. While the focus is on postpaid growth, it's logical that prepaid distribution would also follow. It's unclear whether we'll see 300K+ net additions but at least there is a runway.  A caveat is that with T-Mobile's 600 MHz expansion, their rural coverage will also increase and prepaid could also follow in increasing distribution, if there is commitment from Seattle (the new power center) versus formerly the MetroPCS HQ of Dallas.  In the next year, we'll see how the AT&T prepaid growth engine performs, firing on all cylinders or sputtering.