AT&T's reinvigorated prepaid group has been plugging away after the Leap Wireless (Cricket) acquisition and integration in 2014. Rather than keep the then AT&T Aio flanker brand, Cricket's name had better traction in the prepaid sector.  While AT&T is more than just the Cricket brand (remember GoPhone?), Cricket brings in the lion's share of the additions.

Overall, the Cricket unit has been a positive development, adding over 1.3 million (M) subs in 2015 and over 1.5M in 2016.  Its playbook mirrors its chief rival, MetroPCS which was acquired in 2012. The regionally limited MetroPCS brand expanded along with the T-Mobile national footprint, increasing the brand's distribution reach.  This has also been the case as Cricket increased its footprint and distribution.  With about a 1.5 to 2 year head start, MetroPCS has been the industry prepaid net add leader, with more than 1.3M in 2015 and over 2.3M in 2016.  Given this trajectory, one would expect them to lead in 2017.  However, for 2017, the overall prepaid net add leader is AT&T with just over 1M net adds to T-Mobile's 855 thousand. 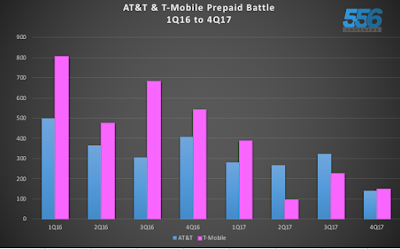 The overall trend, based on the leaders' numbers, is that prepaid isn't growing as hot as it was several years ago.  4Q17's numbers for both companies seem anemic in a Year over Year comparison.  Yet more confounding for industry watchers, AT&T has incorporated prepaid IoT (they say vehicle connectivity) into its 3 and 4Q17 numbers. Those account for 152 thousand additions. If we remove those numbers, AT&T still wins 2017 with 861 thousand, barely edging out T-Mobile's prepaid group.

Looking ahead to 2018, there are two things I'm looking for in the near term: