Yes, it's true. 2017 is two months behind us and the wireless industry is talking about the up and coming 5G.  While the US carrier sector focuses on the higher revenue and lower churn bearing postpaid segment, prepaid is often overlooked. Though prepaid experiences lower average revenue per user and higher churn, prepaid revenue and subs are still a formidable wireless segment.

The big 5 prepaid players, some with flanker brands, dominate the net addition or loss numbers. Therefore, the focus will be on AT&T, Sprint, T-Mobile, Verizon and America Movil. 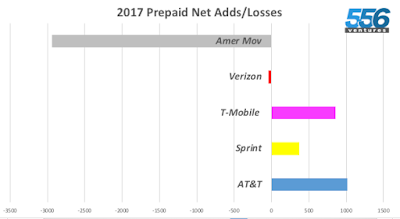 It's pretty obvious from the above chart which company is the year's biggest loser. America Movil lost over 2.9M subscribers. According to the company, the dominant contributor was Safelink (government subsidized lifeline program) disconnects. America Movil wasn't the only company that bet big on the government program. Sprint's Assurance Wireless brand targeted the same segment and also suffered previous losses in its prepaid base. 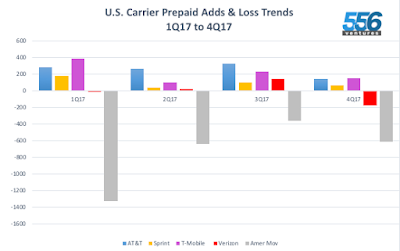 The second loser was Verizon prepaid. After what looked like an upward trend in 2Q and 3Q, the company crashed with 184K losses, mostly with prepaid basic phones. Verizon and America Movil are moving to increase revenue with smartphone subscribers, in essence deemphasizing the classic pay as you go customer.  These two companies are somewhat late to the party as that's been the strategy for T-Mobile's MetroPCS and AT&T's Cricket for several years.

The clear winner in terms of sub adds is clearly AT&T's Cricket.  This flanker brand has been the steady growth catalyst since 2015.  What's important for AT&T is the momentum shift from 2016 in which T-Mobile (MetroPCS) dominated with over 2.5M adds versus AT&T's ~1.6M. It's likely the two company rivalry will continue. Despite losing the overall 2017 growth title, T-Mobile is a winner. Last but not least is Sprint with its major brands Boost Mobile and Virgin Mobile. Though Sprint came out 373K subs in the positive and paled in comparison to AT&T and T-Mobile, one needs context.  In 2016, Sprint lost about 500K subs and in 2015 the loss number was over 1.5M.  So 2017 was a win for Sprint in my book

Coming out of 2017, each player is focused on growing subscribers using the multi-line strategy. While the revenue per user part is less than a single line, the playbook is decidedly reminiscent of postpaid. Remember the old voice days when the financial community were shortsightedly concerned that carriers were leaving money on the table with meager $10/month add-a-lines?  The tradeoff obviously is in lower churn. More lines equals the less likelihood to churn.  The equation changes a bit with prepaid as price is also a main consideration.   At the end of '17 and also now, competitors are moving to the 4 lines for $100/month.   As this is tax 'refund' season (for some), competitors are throwing in the free phone promotion here or there.  But Cricket has somewhat escalated a price war with a $40/month unlimited single line price. The promo duration ends on April 12th. The fine print is that the plan price is only for one year.

Surprisingly, competitors haven't matched as the equivalent plan is still $50.  Historically, the sub activity has  usually occurred in the 1st and 3rd quarters.  It's hard to say whether each competitor will be the instigator for more plan action but there is a balance between acquiring more subscribers while showing higher ARPU/ARPA/ABPU trends and increasing margin AND decrease churn. It's a tall order.

Distribution will define further growth opportunities. MetroPCS can certainly ride the T-Mobile postpaid's coat tails as the company expands into the hinterlands with its 600 MHz spectrum.  Similarly, Cricket can expand its national brand footprint as it gains more dealers.  It's likely that AT&T and T-Mobile will dominate the prepaid scene as Verizon's focus has always been the more lucrative postpaid.  Sprint's tight corporate budget also suggests that its acquisition money should heavily favor postpaid to further its turnaround story (I'm still waiting for Virgin Mobile's 'game-changing' contribution.  Lastly, America Movil will likely continue to shed lifeline customers with incremental growth in the Walmart exclusive Straight Talk.  Let's see what happens.