Originally posted on Fiercewireless just before the Christmas holiday.

2014 is nearly at and end and it's the time of the year when there are countless year-end review articles and 2015 predictions. While there were many highlights of 2014, I choose to hone in on network and competition.  Instead of predictions, my 2015 expectations have been laid out with technology paths and the previous year's events.

Network
Every carrier knows that beyond service plan value and pricing, the network is the core of customer choice. It's no surprise that despite goals the carriers reach, improving, expanding and transforming the network will never really be done. Although AT&T Mobility and Verizon Wireless have reached their coverage targets, capital is still being expended to bolster networks for capacity and coverage. T-Mobile US and Sprint continue their breakneck pace to reach LTE network parity with larger competitors.

AT&T met its 300 million POP coverage target in early September, surpassing its original end of the year target as it needed to close the gap against its main rival, Verizon. AT&T also needed to keep pace in its Voice over LTE introduction, albeit available in only in select markets. Aside from adding coverage, capacity, and expanding VoLTE in 2015, the company continues its ambitious transformation into a software-centric network by 2020.  Two big acquisitions, slated to be complete by the first half of 2015 will trigger network related work.  First, the DirecTV acquisition, the company will need to fulfill its promise to provide fixed wireless broadband to rural markets. With the acquisition of Mexican carrier Iusacell expected to close in the first quarter of next year, much of the remaining year should be laying a foundation for what AT&T touts to be the first North American mobile service area.

Sprint's 2014 travails from the "rip and replace" Network Vision program and turbulent corporate changes contributed to massive uncertainty and subscriber losses. Although the company ended the year with 260 million LTE POPs covered on its PCS spectrum, roaming deals with rural carriers is set to expand its own LTE geographic reach to 298 million POPs in 2015. Ironically, as competitors over delivered on coverage and timing, Sprint met its end of year 100 million 2.5GHz LTE POP target, despite skepticism. In August, the 2.5 GHz buildout strategy shifted to address the heavy data consumption markets, with the logic that the popular unlimited proposition is empty without a high capacity foundation. Still, Sprint hasn't disclosed any POP targets for 2015, as it has previously.

T-Mobile over delivered and beat its own 2014 250 million POP target with 260 million covered LTE POPs. For 2014, the network story was one of aggressive execution by acquiring and deploying 700 MHz A-Block spectrum and refarming/implementing MetroPCS' spectrum to exceed its target. The company is very public about reaching an end of 2015 300 million POP target (without roaming) to close the network perception gap against larger competitors. In doing so, it will continue work to put in service remaining 700, AWS and PCS spectrum.  At the same time, to get better low-band breadth, it will opportunistically purchase additional 700 MHz spectrum. However, since some regional and rural carriers will implement the same A-Block flavor, LTE roaming agreements are logical.

Though Verizon Wireless technically met the 30 million POPs covered threshold in mid-2013, the company continued to deploy and put into service AWS spectrum for capacity and fill-in. Since reaching the 300 million mark, it added 8 million more by the end of 2014. Though it has already started refarming its PCS spectrum for LTE on a limited scale, this effort will likely continue as planned in 2015.

2014 was remarkable in the level of competition. Since space is short, we'll just focus on postpaid and prepaid. On the postpaid side, there were nearly 80 pricing actions and promotions from the top four carriers, not counting the numerous extensions of promotional offers. This was more than double that of 2013. Several standout service plan tools drove customer action; these included Early Termination Fee (ETF) credit, tablet data for life, double data promotions, and no money down equipment installation plans.

Carriers departed from the past practice of constantly restructuring their rate plans, gaming the right price point with the right data level. Though AT&T and Verizon changed their plans in the beginning of the year (i.e., Mobile Share to Mobile Share Value and Share Everything to More Everything) and Sprint rebooted in August with its Family Share Pack and iPhone for Life, limited time promotions in the back half of 2014 drove postpaid volatility and grabbed all the media headlines. Promotions gave carriers a temporary lever to address competition without permanent price drops or higher data levels. 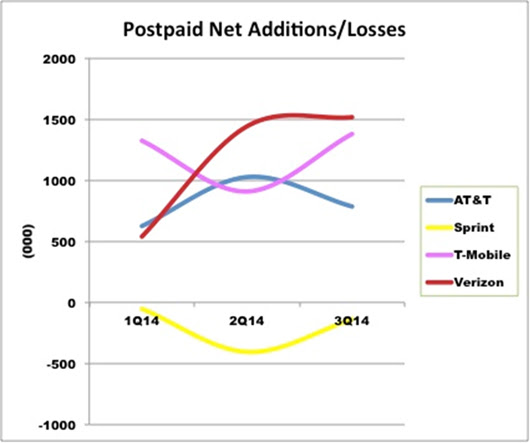 Source: Carrier Reports
However, carriers' full 2014 results won't be known until late January or early February when fourth-quarter earnings calls are conducted.  What we do know has been telegraphed: due to intense competition, Verizon and AT&T warned that churn was a concern. T-Mobile increase its 2014 total net add guidance from 2.8-3.3 million to 4.3-4.7 million and Sprint was confident that they would deliver positive fourth-quarter postpaid net adds.

Without full 2014 data, can we expect the same intensity of postpaid competition in 2015? It's obvious that competition will never cease in the wireless sector but there are some road signs that it won't lull.
Yet the intensity may be tempered as there were signs of financial community/investor skittishness that dropped stock prices. Industry competition is great for consumers but the wireless sector's volatility impacts decreasing margins and perceived overpaying for future spectrum.  2014 will likely be a blowout year for T-Mobile but replicating that performance has already been downplayed at various recent investor conferences. Rather, the thrust was about stabilizing ARPU, retention and upselling. Still, T-Mobile won't stop given their momentum.

Prepaid never sees the headlines that postpaid commands. Though growth wasn't what it was in previous years, it's still hotly contested and relevant.  In prepaid, there were about 70 price and promotion actions, not counting any extensions. This was up a hair from 2013. The prepaid graph illustrates TracFone (folded in acquisitions) and T-Mobile being the big winners up to Q3. 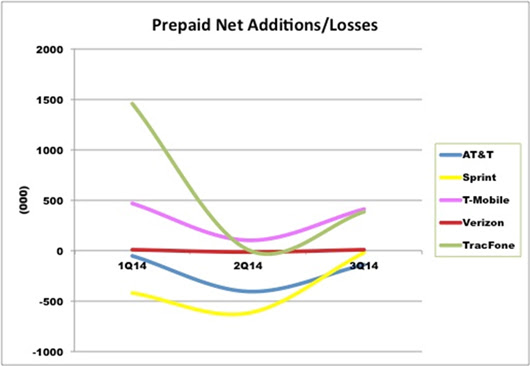 Source: Carrier Reports
Unlike the postpaid activity predominantly occurring in the first three months and the last four months of the year, prepaid promotions and actions were evenly spread across the year. The battles for high-value monthly users consistently apply among the various TracFone brands, AT&T's Cricket, T-Mobile's MetroPCS and Sprint's Boost and Virgin Mobile brands.  While price sensitivity has always been a prepaid hallmark, a shift in network and LTE marketing is broadening.  Meanwhile, legacy CDMA user migration is still on the plate for Cricket and MetroPCS as each seek to move those customers onto the parent's LTE networks.
2015 competition should be spirited, as Cricket and MetroPCS will continue their head-to-head fight. Boost and Virgin will try to stay relevant in the fight while. Given postpaid's momentum, prepaid growth may be stymied at similar 2014 rates. Get the popcorn ready for next year.
Posted by 556 Ventures