Now that three Tier 1 carriers have reported their Q4 results, here are some observations and commentary on smartphone growth.  As most industry people know, smartphones are the hot user commodity. Smartphones serve many purposes from a churn reduction tool, to ARPU uplift (offsetting voice revenue decline) to increasing operational efficiency (move data consumption to a more data efficient (capacity and throughput to the LTE network). But the old 3G network also has legs so for now, wholesale (MVNOs & M2M) and prepaid can extend return on old investment there.

iPhones have been a catalyst for increased carrier data revenue. AT&T's past  iPhone exclusivity has allowed it to accumulate a massive customer base that proven to be low-churn and loyal. With the exclusivity gone, other carriers (through Apple's deal-making and carriers' realization that an iPhone is competitive table stakes) also jumped on the iPhone bandwagon.  The notion that iPhone is such a powerful sales acquisition and retention tool has played out again in Q4 2012.


As a percentage of the overall Q4 smartphone sales, iPhones activations accounted for:


On the whole among the three Tier 1 carriers, the iPhone accounted for 65% of smartphone activations. 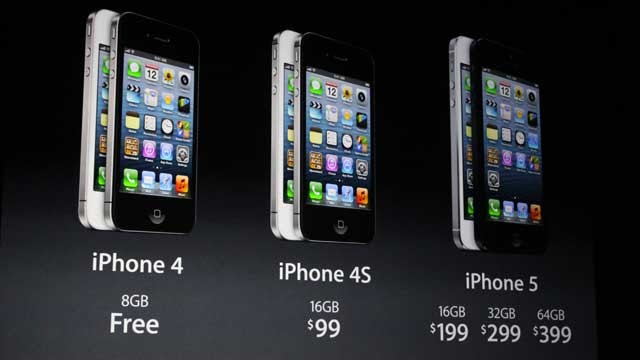 Impressive stats for sure. With contenders from BlackBerry (BB10 OS), Microsoft (Windows Phone 8) and Android, can the iPhone in the U.S. continue its run?  I submit that this hinges on Apple innovation.  As I've said previously, Apple needs to innovate, as its user interface (UI) is aging with incremental innovation.  Customers have a lofty expectation of radical things for each iPhone (and iPad) model.   Apple needs to deliver in 2013 or the early adopters (and then the mainstream) will move on.