1Q19 T-Mobile Prepaid -– Slipping and Sliding in the Postpaid Shadow

T-Mobile has outperformed its rivals for many quarters. Postpaid growth has been its consistent flagship that many focus on. To complement the postpaid rocket ship, MetroPCS’ expansion perhaps put the cherry on top. Today, postpaid is still growing but prepaid has been slipping since 2Q17, when AT&T prepaid pushed ahead. Throughout the quarters, questions were asked about why prepaid has slowed. Many times, the corporate answer is that the lines are blurring between prepaid and postpaid. However, T-Mobile had made it easier for those who were deemed less than prime customers to access postpaid plans, thereby adding them to the postpaid count.  Those prepaid to postpaid migrations have been highlighted consistently for many quarters. We all get it, postpaid customers bear higher revenue, they tend to churn less and more are more stable.  To be sure, the goodies of T-Mobile Tuesdays and free Netflix are also nice value draws.

Still, prepaid to postpaid migration takes away from the Metro by T-Mobile subscriber base and its posted revenues.  With this, there has to be tension between Dallas-based Metro (and its dealers) and corporate in Seattle.  The halcyon monster growth quarters from 2Q15 to 1Q17 are over while postpaid continues its march. In 1Q16, the prepaid group posted a record high 807,000 net adds but in 3Q18, it had dropped to a low of 35,000.  By the way, at the end of that quarter, Metro by T-Mobile rebranding was rolled out.   Perhaps reinforcing MetroPCS was T-Mobile would help.    4Q18 was ‘okay’ but 1Q19’s 69,000 contrasted starkly against 1M+ postpaid net adds. To add salt to the wounds, 120,000 net prepaid customers migrated to branded postpaid. 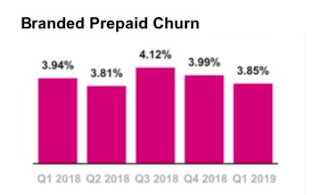 However, ARPU has slipped to $37.65 from $38.90 YoY and also sequentially.  Some can argue this is inconsequential yet from an overall prepaid revenue contribution, 1Q19’s $2.38B contrasts with 1Q18s $2.4B.  But postpaid continues to deliver with upward trends in net additions, revenue and low churn.

Why it matters:  Perhaps the company is paying attention.  There is that thorny prepaid group integration task if and when the Sprint acquisition happens. To that end, longtime MetroPCS head Tom Keys is moving out of that role to work on the integration and transition task. After that, Mr. Keys will be retiring (likely with a non-compete).      Metro staff will have  new corporate EVP bosses in the form of Jon Frier (sales) and Matt Staneff (marketing) based in Seattle.  This is a rub for dealers as they’ve had deep and trusting relationships with the Dallas-based Keys.  How will their voices be heard when these EVPs have a bigger ball of wax to run, given the corporate focus on postpaid?

Dealer performance and happiness in the end affects T-Mobile’s prepaid numbers.  T-Mobile corporate will have to navigate their distribution’s discontent and concern in making or losing money.  Presumably Mr. Keys will advocate for the brand that he has helped built and we shall see what develops.  Will Seattle drive new prepaid (non-loss leader) promotions to bring the prepaid group back?  We shall see.

Afterthought: What if the Sprint deal fails? What will Tom Keys do and will the Dallas to Seattle reporting and control structure remain in place?