Last quarter, AT&T ceded its prepaid net add position to T-Mobile. AT&T had led five out of the last eight quarters.  With the acquisition Leap Wireless and its Cricket brand, AT&T slowed the MetroPCS juggernaut that had been dominating the prepaid sector since T-Mobile bought them. Both companies had a similar playbook, de-commission the old CDMA network and expand brand and distribution beyond the old regional footprints.  For people playing wireless industry Trivial Pursuit, MetroPCS’ kickoff expansion was coined “Apollo 15.”  To put it in a competitive context, from 1Q15-4Q18, AT&T and T-Mobile accounted for over 10 million net additions while competitors were in negative territory. 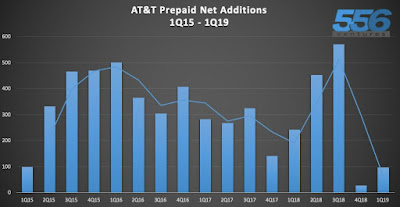 Looking at the drop in growth seems somehow disturbing after so many go-go quarters.  Is prepaid plateauing, especially since all other prepaid competitors have loss subscribers (Sprint hasn’t reported yet as of this writing)?  It may be but there are some silver linings: 1) Some solace for the prepaid group as their 85,000 phone adds beat their postpaid brethren. 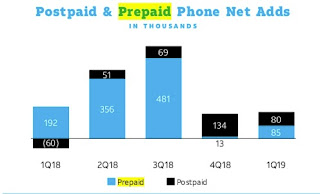 2) In his prepared remarks, Chairman Stephenson reiterated the company’s strategy to focus on the high-value prepaid segment but divulged (for the first time in my recollection) that Cricket “had its lowest ever quarterly churn rate of less than 3%, down more than 60 basis points year-over-year. Prepaid revenue growth was solid, up more than 6%. We now have more than 10 million Cricket subscribers, double what we had when we acquired the company in 2014 with more than 17 million total prepaid customers under the umbrella of AT&T.”

Why it matters:  Chairman Stephenson’s unveiling of prepaid metrics (prepaid churn and ARPU are not publicly available metrics) suggest tremendous stability in the Cricket base.  For long-time industry watchers, prepaid churn ranged in the mid 4% to 5%. Therefore, churn less than 3% is a tremendous achievement. Moreover, stating there are over 10 million Cricket subscribers since the 2014 acquisition, out of the over 17 million prepaid base gives context on Cricket’s explosive performance.

Growth and acquiring switchers is an expensive game. For 4Q18 earnings, AT&T cited a competitor’s loss-leading handset promotion which took a toll on its branded prepaid. With its debt paydown targets from the Time-Warner acquisition, the company is unlikely to respond to any loss-leading promotion. This has been articulated in both the prepaid and postpaid side. As a result, explosive growth may not be on the horizon in the near term, barring extreme competitive circumstances.

Caveat: If postpaid distribution will expand under FirstNet, prepaid may ride its coat tails.