America Movil with over 21.6 million subscribers is the largest US prepaid player in 1Q19, closely followed by T-Mobile (21.2M), AT&T (17.2M), Sprint ([CY 4Q18] 8.9M) and finally Verizon (4.48M). With many prepaid operating brands absorbed throughout the years and the backing of its Mexican-based parent, the company is still a prepaid force but has ceded prepaid leadership to AT&T and T-Mobile.   To put it in perspective, America Movil USA reached its corporate high of over 26 million subscribers in 4Q14.

Similar to Sprint, its bet on lifeline services (SafeLink) has punished its subscriber base count with continued losses.  Partially offsetting this downward pressure has been the shift from non-recurring plans, such as pay as you go, to higher ARPU bearing monthly plans.  Chiefly, Straight Talk (available at Walmart  and ~43% of its overall base) has been its growth engine for many quarters while the other brands have declined. To understand the significance of Straight Talk and SafeLink, the two are highlighted in quarterly earnings reports along with an Other Brands category (~44% of the base). 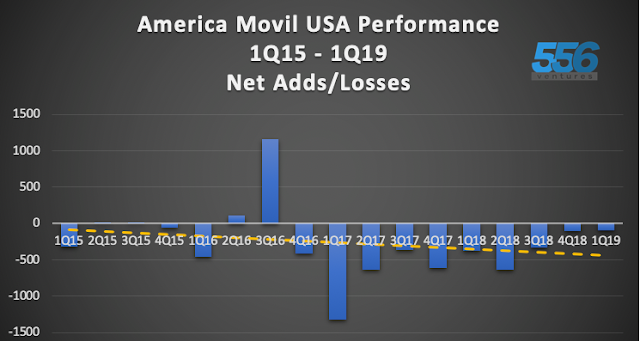 Why it Matters: From the above chart, the truly bad days seem to be behind the company but SafeLink will likely continue to contribute to the losses. Though losses are less for the quarter, the US business unit's EBITDA margins is a measly 6.2% compared to the high 20s to low 40s of other America Movil's business units. Also, rewinding four years, the US business unit's 1Q15's EBITDA margin was 11.7%.  This suggests that it's been a truly competitive prepaid environment and the biggest MVNO is just getting by.

There have been suggestions that America Movil may be in a position to acquire a spun off Sprint prepaid unit as a possible condition of a T-Mobile/Sprint go-ahead. America Movil management has indicated receptiveness to that as buying companies to increase the US opportunity has always been in the playbook. By no means are they the default winner as there are other parties vying for a parted out Sprint prepaid unit, if the occasion arises. We'll know in June/July?