Ronan Dunne, the current CEO of Verizon Wireless popped up on the news led by an article in the UK's Telegraph business pages this past Saturday, Sept 2.  The gist of the speculation is that he was in the UK in the previous week supposedly interviewing for the BT CEO job.  His background seems right as he had been an O2 (BT's wireless carrier competitor)  since 2001 with stints as CFO in 2005 and ultimately the CEO from 2008 to 2016. 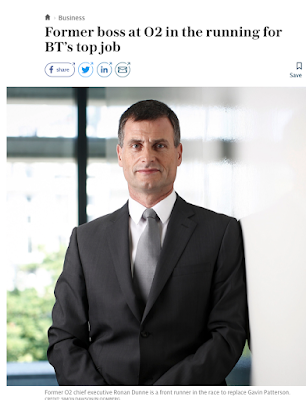 In 2016, he joined Verizon and how he got here to the States was a subject of an thorough  Independent piece.  Much has been speculated that he was looking for a new position after Hans Vestburg got the Verizon CEO nod.  I noted that he could have been a candidate for the the Lowell McAdam vacancy in an earlier June blogpost but there were stronger candidates.

Here are some quick pros and cons for Dunne to take the BT CEO helm:


On paper, Dunne as an experienced executive is fit to lead BT and like many job opportunities, it may be fit, chemistry and upside in the decision making process.  I guess we'll see soon what happens as BT needs to fill the vacancy quickly.