As a long time industry analyst and wireless segment observer, I've witness short term/tactical carrier moves in price plans to increase competitiveness, the network technology generations positioning and rollouts and corporate strategic turns.  Experiencing this June's AT&T Shape conference in Hollywood validated to me, the ongoing reinvention of a telecom company into a global media company.     Of course, that was all set in motion with the 2014 DirecTV acquisition and now with the $85B Time Warner buyout, it's full speed ahead.  That has been the big media journey so far.  How the company lines up to this important goal is found in internal and external complementary changes.  One such change is the creation of the Shape conference.


Rewind back to the time when smartphone adoption was ramping up. Device app development was exploding.  The internal AT&T investment to spur innovation through external collaboration created the Foundry concept.  AT&T's Palo Alto Foundry launched in 2011 to bring in Silicon Valley minds to work on cool ideas, at the time, app development was the low hanging fruit.  In conjunction, the AT&T Developer Summit had already started in early 2010. Always a couple of days ahead of the Consumer Electronics Show opening, the Dev Summit sought to capitalize on the tech CES attendee base.  The four day conference designed with speakers, a hackathon, prizes and parties spurred networking among AT&T, partners and developers.  As an aside, 2014 was maybe the most infamous due to the party crashing by T-Mobile CEO, John Legere. 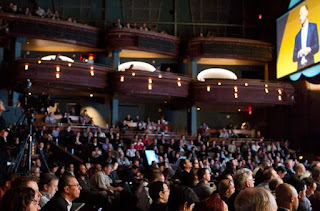 Fast forward to the increasing importance of content, mainly video and the influence of DirecTV and more importantly, DirecTV Now (launched in Fall 2016) as content delivery platforms.

With a 6 year run, AT&T ended the Dev Summit. It was time to move into the media and content community.  AT&T Shape 2017 (billed as a tech and entertainment expo) conference at Warner Brothers studios nods to AT&T's strategic imperatives of content and its ecosystem.  Yet the AT&T network, as in the Dev Summit, was a backbone topic.  Though a hackathon with cash prizes was still an event, spotlight shifted to the AT&T Film Awards.  With multiple winning categories, including a grand prize of $20,000 in the Best Short: Emerging Filmmakers category, filmmakers were now in the driver's seat.  Nevermind that the filmmakers spend much more than the grand prize to create their film, Shape provides a platform to catch the eyes of Hollywood execs, and (now) WarnerMedia, the AT&T content business unit. 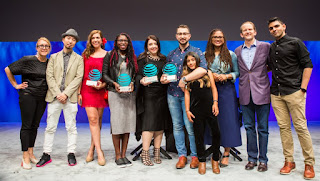 At this year's Shape, AT&T Mobility & Entertainment President, David Christopher 'called an audible'  (impromptu) and declared all three finalists, winners (each winning $20k) in the Best Short:  Emerging Filmmakers segment, to the audience's approval. It was a nice move, one that filmmakers in the audience will remember as AT&T largesse.

While tech and content speaker sessions packed interested audiences, the tech demos in the a Warner Brothers town square pushed a lot of 5G technology education and virtual and augmented reality companies.  While some of the demos were stretching one's imagination, it's the trajectory towards these VR/AR areas combined with 5G that is undeniable as future growth areas.

Content is king. That has been punctuated with the rapid close of Time -Warner into WarnerMedia.  The next step in AT&T's strategy is to further monetize this content beyond the standard distribution and licensing agreements.  The four main business units under the AT&T corporate umbrella are Communications, WarnerMedia, International and Advertising & Analytics.  AT&T Chairman Stephenson has already spoken bullishly of the smart monetization potential of its burgeoning ad business, especially when the company has owner's economics on content.  Stephenson has also stated that there will be smaller ad/adtech acquisitions coming.  For Shape 2019, I am betting that this business unit will be more prominent, showing content creators and owners on how they may monetize their assets further.