Verizon Wireless modified their postpaid rate plans. There are 4 key elements of the announcement.

2) Unlimited international messaging to complement unlimited domestic messaging will be included in these More Everything plans.

3) Each More Everything plan line receives 25 GB of cloud storage (a.k.a. Verizon Cloud), an upgrade from the norm of 5GB, which also happens to be the standard offerings from AT&T and Sprint.

There are plenty of media analysis looking at the consumer, and I won't replicate that.  The takeaway for this new action is that it's focused on AT&T.  Verizon Wireless and AT&T have long been each other's primary competitor as both companies position themselves as premium carriers.

Verizon Wireless' More Everything move follows a series of back and forths in industry rate plan adjustments.  Many can argue T-Mobile's UnCarrier 1.0, 2.0, 3.0 started it all off in 2013.  However, AT&T's Mobile Share Value plans launched on December 5, 2013 help start the ball rolling with Verizon Wireless. AT&T's and T-Mobile's (UnCarrier 4.0) Paid switching programs joined by Sprint's January Framily plan announcement also added to the competitive atmosphere.   Though there was a minor Verizon adjustment in January, that was to help to upgrade their featurephone base.  However, things got a bit more complicated at the beginning of February when AT&T announced $15 per smartphone line for non-2 year {Next or customer supplied) Mobile Share Value plans with 10 GB or greater thresholds. 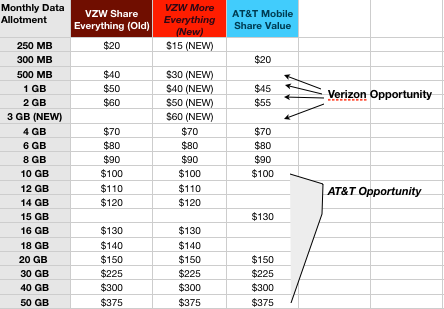 Aside from the new plans under $60, Verizon Wireless didn't touch the rest of the portfolio. Verizon now opens the battleground on lower data thresholds with 5 options below $70 compared to AT&T's 3 choices.  At the same data levels of 1 & 2 GB, Verizon Wireless turned a pricing disadvantage to one that beats AT&T by $5/month. 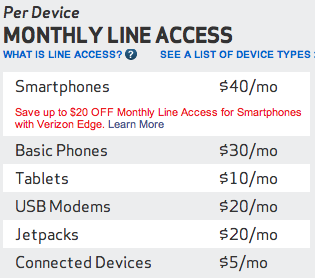 Timing wise, we're midway through 1Q14. The ink is still a bit wet on AT&T's early December Mobile Share Value plans but we've seen these monolithic corporations become quite nimble in providing rapid competitive responses.  The stakes are too high these days.

Want to talk about this and other carrier moves more? Contact me at william.ho (at) 556ventures.com.
Posted by 556 Ventures