Sprint and Clearwire - It had to be - Network Future?

Now that Sprint will acquire the remaining 50% of Clearwire that it already did not own, what does this say about the near term and future?  While there are many stories about the financial side, most industry insiders knew that the Clearwire acquisition was a strategic imperative. Back in October when Sprint moved to take more control, I offered some thoughts  on why Sprint's long term control of Clearwire made sense. Much of the logic is rooted in the long term network strategy.

Sprint's network strategy hasn't changed since 2010 with the introduction of its Network Vision.  Many analysts derided the price tag and its hosting positioning but today, Sprint's bet seems to have turned out well.

When Sprint announced Network Vision in 2010, it seemed a bit presumptuous that 2.5 GHz was included into the spectrum chart especially since Clearwire had not committed to the effort and especially Sprint did not control any of that spectrum.  Clearwire had its own separate network deployment strategy with capital already sunk in specific markets using WiMAX to power Sprint's 4G data play. 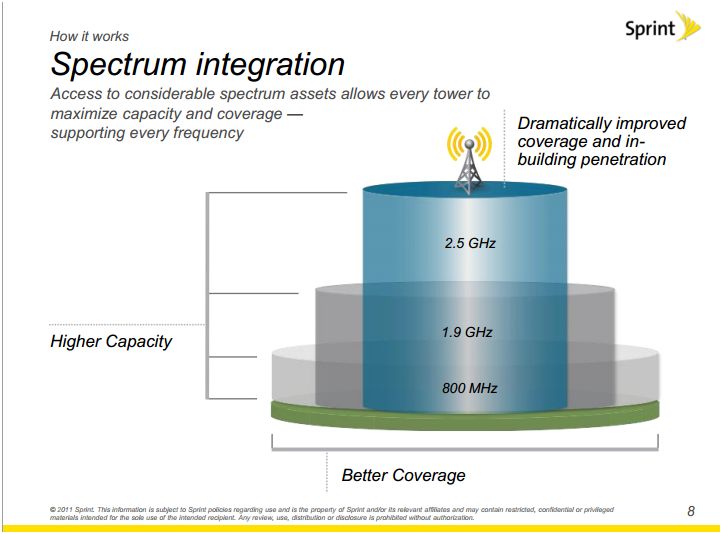 In order to expand markets, it was logical that Clearwire take advantage of Network Vision but that didn't happen. Executive tensions (between Sprint and Clearwire), the need for Clearwire corporate independence and lack of capital to expand contributed to stalling the grand Network Vision execution.  With the urgency to stay in the LTE game against wireless competitors, Sprint worked with Clearwire on specific markets to deploy the TD-LTE flavor in specific 'high data tonnage' markets.  It was clear, Clearwire would provide the complement to Sprint's near term PCS-based LTE strategy.

Fast forward to 2012, what has changed?  The answer - Softbank.  Though the Softbank-Sprint acquisition approval is scheduled for mid-2013, Softbank's $3.1B bond purchase in October freed Sprint to make specific strategic moves beyond Clearwire in the form of US Cellular subscriber and spectrum acquisition in November.

Back to the 'new' Sprint network,  surprisingly, the network slide hasn't changed.  To Sprint's credit, they're executing on their vision. 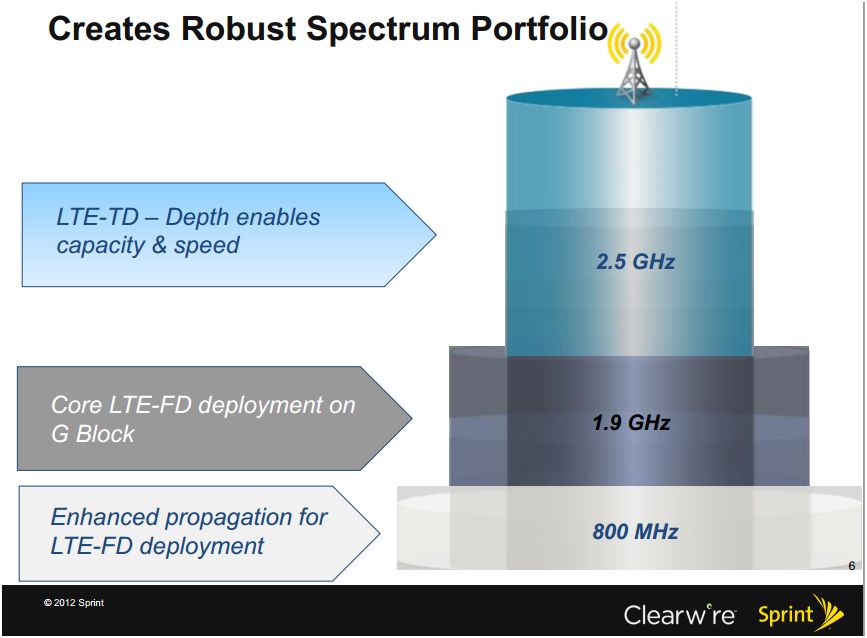 But what has changed is a bit more detail specific to LTE.  Today's 800 MHz band primary is envisioned for voice. With better in-building penetration properties, having voice is still the 'bread and butter' revenue bearing service.  800 also hosts the soon to be discontinued iDEN platform. Eventually 800 will also run LTE with VoLTE.  However, 800 LTE is more than 2-3 years away. The near term LTE solution is in the PCS band. But with only a 5 X 5 deployment and also running 3G, the analyst community questioned whether this could handle increasingly high-data usage especially in light of an unlimited data service proposition.

To address high data use, Sprint engaged Clearwire in a data offload arrangement.  Rather than a national TD-LTE view, Sprint would identify specific high-data tonnage markets for Clearwire to buildout its TD-LTE. The concept: with plenty of 2.5 GHz spectrum, Clearwire (and Sprint) could address subscriber [retail and wholesale (think data MVNOs)] capacity and still offer a speed differentiation. Yet with an independent Clearwire, Sprint clearly had no control of its future. Therefore, it was a strategic imperative for Sprint to take over Clearwire.   Sprint also had to act as the financial community was advocating Clearwire sell "excess" 2.5 spectrum to raise cash.  This flies in the face of any network planner as history has shown that spectrum always appreciates and the overused 'spectrum is the lifeblood of a network' adage still holds.

Assuming that the Clearwire acquisition goes through, will Sprint expand or accelerate the original Clearwire deployment plan?  I say yes, they have to eventually.  Whatever the TD-LTE markets previously agreed upon, it only address specific high density markets.  To offer a broader coverage story that rivals competitors, Sprint will need to show a bigger TD-LTE footprint.  It's taken for granted that a data-offload (of PCS LTE) strategy is still in play.

There are two questions in my mind that Sprint need to address.  First, a broader future question is when Sprint will exploit the national 2.5 GHz coverage.  With a national footprint, Sprint ensures a richer wholesale platform and deeper capacity.  Sprint strategy guys have likely played this scenario out.  With less than ideal propagation (relative to 800 (and 700)), small cells and associated backhaul will play a prominent role (read more capital).  The second is more of a technical question.  When will Sprint take advantage of its potential speed advantage. With aggregating spectrum, Sprint can position speed and unlimited as a marketing differentiator much like Verizon Wireless' coverage.  Of course the answer is when the TD-LTE ecosystem commercially supports this on the infrastructure and device side.

Stay tuned for more Sprint moves in 2013.
Posted by 556 Ventures