FierceWireless quoted T-Mobilenews.com's posting on the introduction of handset trade-in options.  While this may be news to some, the game plan had been somewhat laid out back at DT Capital Markets Days in December 2012.  At that conference, CEO John Legere talked about moving to an all Value Plan (vs the "Classic" phone subsidized plans) portfolio in 2013. A crucial element of that plan and subscriber adoption was the device trade-in value proposition. 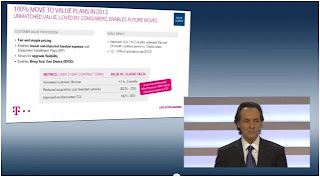 Let's recap the postpaid Value Plan.  Essentially, the plan is a less expensive monthly outlay than the traditional Classic plan. In order to get the lower monthly price, the customer either brings their own device (read iPhone) or buys a device from T-Mobile. While these devices could be $300+, T-Mobile has long offered an Equipment Installment Plan or EIP (financing for the credit eligible).  T-Mobile's argues that Value Plans offer upgrading and flexibility.  That is if you upgrade, you don't have to change (extend) your contract.  The company hopes a new trade-in program will provide customers an easy way to take the device's value towards a new device or the service.

However, trade-in programs aren't new. They've been in the industry for a while and all tier-one carriers have existing programs. 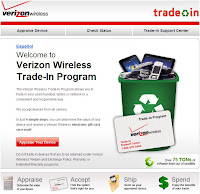 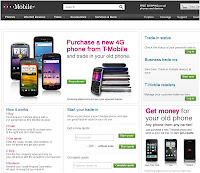 Even T-Mobile has a current program.   Big box retailers such as Best Buy, Walmart, and RadioShack also have trade-in programs.  So it appears that some companies advertise it more as a means to generate sales and traffic than others.  If a T-Mobile trade-in program already exists, we'll have to see how a new one differs.  Perhaps it may be just greater advertising and customer awareness? 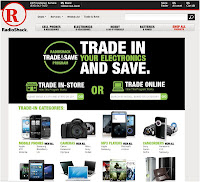 Regardless, the focus of this post is T-Mobile's view on its 2013 strategy to Value plans. At the January Consumer Electronics Show, CEO Legere reinforced its Value plan strategy, separating "the device and rate plan."

With Value plans already in existence in the T-Mobile portfolio since September 2011, what's the logic behind getting of the old Classic or subsidized plans.  It comes down to profitability and market positioning.  On the surface, the lower price points (vs competitors) and unlimited proposition should be the main points T-Mobile should be driving home. They differentiate with their yet to be fully launched "Uncarrier" campaign.  The profitability logic was revealed as Legere pushed his case to investors/the financial community back in December.  Here are some highlights cited and other value propositions: 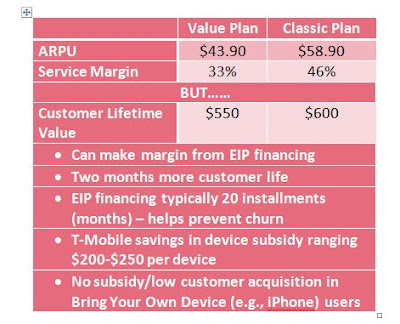 While the standard ARPU and service plan margin seems counter intuitive, the  bottom line calculus in revenue and overall margin has obviously passed the internal business case.  Moreover, churn reduction and postpaid subscriber stability were stated 2013 goals.  Conceptually, the Value plan strategy should deliver this. Yet the company is experimenting and trying to change embedded wireless (postpaid) customer behavior.  I think I am stating the obvious by saying that buying a device at full price is counterculture in the US market where inexpensive devices rule.  A less painful upfront cost has proven appeal.  T-Mobile has an formidable challenge ahead to move its base to the new plans and to attain switchers.